See full specifications
Publisher's description
Using a GUI interface and a Perl coded back end, corrupt docx Salvager will often be able to extract text from damaged or corrupted word 2007/2010 docx files where Word 2007/2010 fails. It can also be simply used as a viewer of the text in a docx file without having Word 2007/2010. The extracted text can even be edited in the interface. Additionally it now has a pre-extraction zip repair step and an 'Alternatives' menu that improves its usefulness. The Alternatives Menu includes a shortcut to Recoveronix' Online File Repair and mentions a the coupon 'S2SERVICES' good until 05/01/13 for free recovery, a $39 a pop value.

This program requires the installation of the Microsoft .NET version 2 framework. It was previously known as Damaged DOCX2TXT. 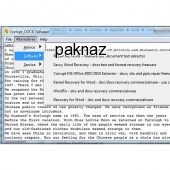