See full specifications
Publisher's description
Excel 2007/2010 files are really conventionally zipped collections of mostly XML files. XML is not tolerant of file corruption and from the errors generated it appears that excel 2007/2010 is using a fairly corrupt intolerant XML reading algorithm to even salvage unformatted data from corrupt xlsx format files. Corrupt XLSX Salvager uses Perl coding and modules to extract the sharedStrings.xml and worksheet.xml files where all of the unformatted data resides in an xlsx file. Since this Perl coding does not use a standard XML reading applet or module but identifies the cell data as text or string and extracts, the result is more less perfectly extracted data until that part of the xml files where the corruption starts, is reached. Contrastingly, Excel 2007 appears to return no results for that particular xml file, say one coding for an individual worksheet, if it encounters any XML errors at all.

Additionally Corrupt XLSX Salvager uses the 7zip unzipper which appears to be more tolerant of zip corruption then the one used in Excel.

The program has a simple Perl/Tk GUI front end. It can also be simply used as a viewer of the unformatted data in an xlsx file without having Excel 2007/2010 installed.

An improvement for version 2.0 is zip repair pretreatment which is carried out before all recoveries, further improving success rates. Another improvement is an extensive 'Alternatives' menu of links to advice, software and services to use if the program doesn't work, possibly proving its usefulness even if it fails to recover data adequately. One of the alternatives menu choices, Recoveronix' Online File Repair, is offering a free recovery using the coupon 'S2SERVICES', through Nov. 1, 2013. 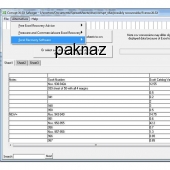