1. A digital draft board should be simple and easy to use.
PrimeTime Draft Football 2013 is designed to be used by anyone hosting a fantasy football draft party We keep the user interface streamlined so that you spend less time managing the draft and more time enjoying the party.

PrimeTime Draft Football 2013 is the premier fantasy football draft board application - whether you are looking to simply ease the burden of draft management or wanting to take your draft party into PrimeTime! 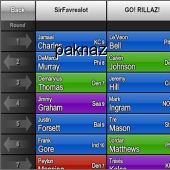